Posted Over 1 Year ago by Post-Wall Feminist

I similarly find it fascinating that they want you to have IDs for voting, but not for guns.

The voter id thing doesn't make a lot of sense -- you already have to register in order to vote, and they check that you're that person at the door. Idk what a voter id would really offer beyond that.

I'm pretty *thoroughly* against vaccine passports, those are uniquely draconian, and also don't make a whole lot of sense given that being vaccinated still allows you to spread the virus.

Heres the deal. If people would listen to actual doctors with degrees in the field they talk about and get the vaccine instead of allowing false information spread by their aunts former roommate then there would be no need for a vaccination card. But these morons go around not believing covid is real, and that the government is using it to plant 5G chips so they can track you or whatever and then they get and spread the disease to people who are the most vulnerable like the elderly and people who already have immune compromising illnesses or conditions who then die from it. Then they think because they only got mild flu like symptoms that it’s nothing to worry about. It’s the same reason that there has to be an actual fucking law to force people to wear a seatbelt when driving in a car.

I’ll tell anyone this that thinks that the government is trying to control them so they can do whatever the fuck paranoid people fucking make up and track them with 5G chips:

If the government really wanted to track you and follow your movements, they dont need to put a chip in you. Your cell phone has a built in GPS that connects to satellites in fucking space that can then be accessed by the government to track down where calls and texts are coming from at any time, and even if you are one of those people that have an old flip phone that’s on one of those prepaid minute plans you can get at convince stores, those phones still connect to the same signal towers as regular cell phones. The number given to those ‘burner’ lines is still preloaded into a database somewhere because a legit phone company still has to generate and maintain than number. Any texts, calls or internet searches from those burner phones still get logged by those places. If the government wants to track you while using that phone all they have to do is find out the number you purchased and start tracking it, and your location can be triangulated at anytime with there not needing to be a gps in your phone.

Also, Any car made in the last 10 years or so also has almost certainly has some sort of gps tracking device in it, even if your car does have a gps application built into the dash for planning routes.

The government literally has no need to put a freaking 5G chip in you and has nothing to gain from killing people who actually listen to them. If anything, the conspiracy nuts should be thinking the government would be trying to keep those that listen alive with the vaccinations and hoping the ones that don’t listen will die off from their own fucking stupidity.

And also, I’d love to have a 5G chip implanted in me if it would give me consistently better phone signal.

Also, let’s not forget about social media like Facebook where those same paranoid morons spread their lies and conspiracy theories is easily accessible by the government and Facebook has admitted to selling user information that’s set to ‘private’ to private companies and the fucking government. And what do you think Facebook tracks? If you don’t know then you should really look it up.

Also, yea getting the vaccin doesn’t protect you 100% or prevent you from spreading, it does however make it far less likely to happen and more likely that your body will kill the virus off before it can make you sick or stay in your system long enough to spread. Again, people need to trust what the drs say and not fucking Facebook ’experts’ 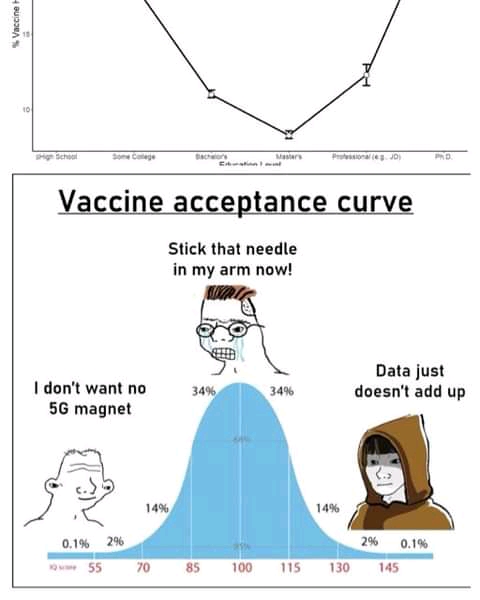 The voter id thing doesn't make a lot of sense -- you already have to register in order to vote, and they check that you're that person at the door. Idk what a voter id would really offer beyond that.

Yeah, I never really understood it. Adding to your point, there has never been any serious evidence of widespread voter fraud in a modern election, so it seems like a case of don't fix what's not broken. The entire "issue" is a fabrication designed to rationalize policies that effectively suppress turnout in poor and minority communities.

Personally I think a good alternative that would solve both voter suppression and voter fraud claims would be mandatory voting like many countries have (allowing, of course, for a "no confidence" option if you don't like anyone on the ballot).